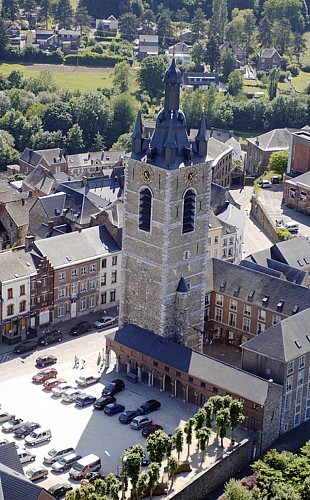 The belfry at Thuin, built in the first half of the 17th century to replace a previous bell tower that had fallen down a few decades earlier, is the only remnant of the collegiate church of St Lambert and St Théodard, which was destroyed in 1811. Although it had the function of a chapter house, the tower of the collegiate church was also the municipal tower – and hence a genuine belfry, making it the only one in Wallonia to assume these two functions from the outset. This dual vocation can be seen on the south façade of the building where the coats of arms of the mayors of the time the tower was constructed are visible just above the niches dedicated to the saints protecting the church.

The sturdy belfry overlooks the upper part of town with its 60-metre silhouette, built from sandstone blocks broken up by courses of limestone. The upper section features large sound holes topped by the dials of the clock. It is capped by a bell-shaped spire surrounded by four polygonal pinnacles. After losing its top in a storm in 1662, the belfry was repaired as part of major works carried out in the middle of the 18th century. Having a dual function meant that the belfry was not demolished with the remainder of the religious building, of which traces of its roof are still visible on the east side of the belfry. A gallery has been added to what became an isolated tower. The belfry benefited from a full restoration programme at the beginning of the years 2000.