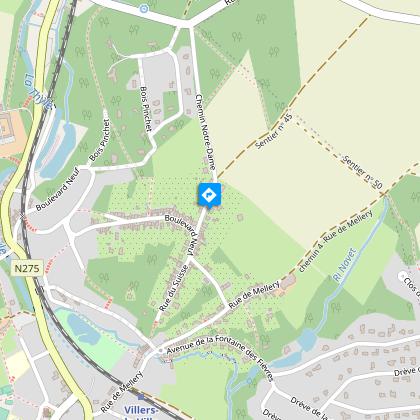 At the northern edge of Tilly, the chapel of Notre-Dame des Affligés is a small oratory (1731) that held an oak Virgin dating from the 1600s. It was erected by a former soldier in fulfilment of a vow: as he passed through Villers to wage war in Germany, he promised to build a chapel in honour of the Virgin there if he came back alive. He returned later with an antique statue saved from a fire. He settled in the south of the abbey and lived there as a hermit for several years, collecting the sum needed to fulfil his vow penny by penny. The chapel soon became a place of pilgrimage. Notre-Dame des Affligés (Our Lady of the Afflicted) is called upon to help young children having difficulty taking their first steps and all those suffering problems with their legs